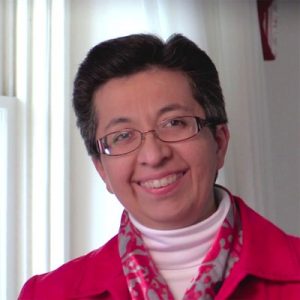 On August 11, 2017, Sr. Teresa Maya, CCVI assumed the role of President of the Leadership Conference of Women Religious (LCWR), an association of leaders of the congregations of Catholic women religious in the United States.

Sr. Teresa Maya is the second Latina to serve as President of the Conference. The first was Sister Anita de Luna, MCDP from San Antonio who served in 1992. Sr. Teresa is a member of the Sisters of Charity of the Incarnate Word in San Antonio, TX.

Maya has an excellent educational background having received a BA in History from Yale University, an MA in Systematic Theology from the Graduate Theological Union in Berkeley, CA and a Doctorate in Latin American Colonial Church History from the Colegio de Mexico in Mexico City. Born in Mexico City, she has lived and served in both Mexico and San Antonio, TX and she brings a transnational approach her ministry.

When asked about LCWR’s role in Hispanic Ministry Maya stated,

“We serve in the Church and for the Church – this of course includes Hispanic Ministry – and a growing commitment to Latino communities.”

With respect to LCWR’s commitment to the V Encuentro Maya indicated,

“First, we are encouraging the Sisters to participate at the local level, because it is crucial that they participate at the parish and diocesan level. Secondly, we invited the V Encuentro to be among the groups that exhibited at the last assembly meeting in Orlando. Finally, we will look at how to collaborate with AHLMA, the Association of Missionary Latina Sisters in America and any other ways.” 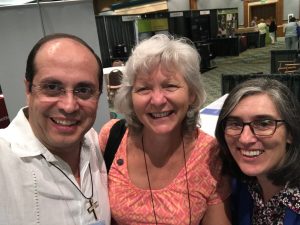 Mr. Alejandro Aguilera-Titus, National Coordinator for the V Encuentro, was present at this year’s LCWR conference in Orlando and confirmed,

“Sr. Teresa Maya is a wonderful example of the leadership Hispanics/Latin@s are called to provide to the entire church in the United States and beyond. She is truly a gente-puente, a bridge builder that fosters communion and solidarity in our culturally diverse church and nation. We are so proud of Sr. Teresa and pray for her in this new and most important role within LCWR.”