ACADEMY OF CATHOLIC HISPANIC THEOLOGIANS OF THE UNITED STATES-ACHTUS- 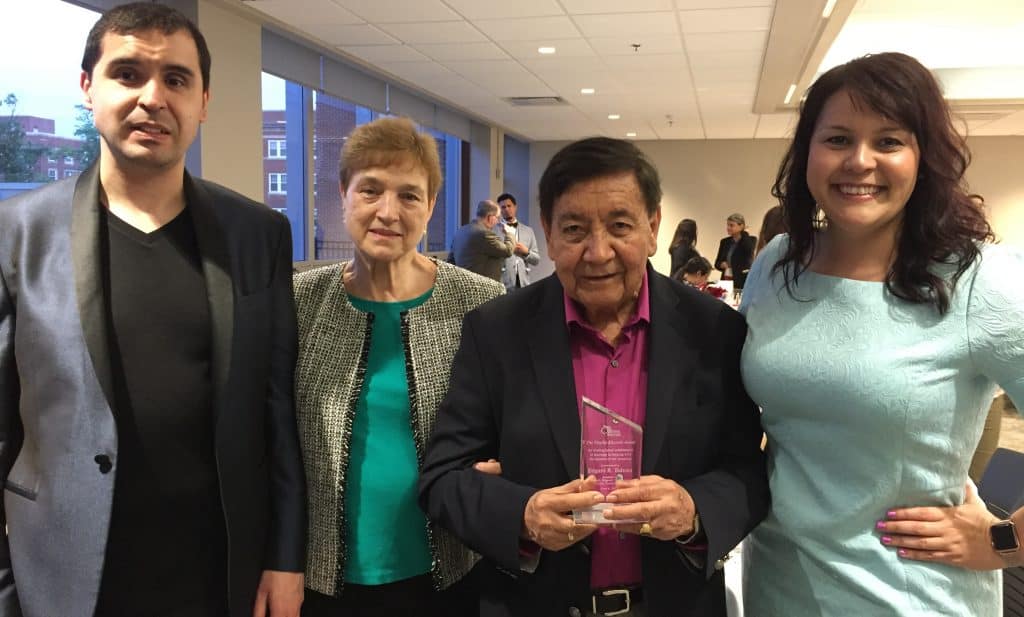 I, Jacqueline Hidalgo, am lamentably standing in for Orlando Espín who really wanted to be here to give this award but, because of a family emergency, he couldn’t be here so I am reading the citation he crafted.

The 2019 recipient of the “Virgilio Elizondo Award” is one of the best-known and most influential Latino pastoral theologians in the United States.

Edgard Beltrán is a theologian who has done theology “con los de a pié,” as he often says. Pope Francis speaks of the need for theologians to “smell like the sheep,” and Beltrán has been doing this most of his life. In fact, he was the champion of much of the language the Pope uses today when it was first coined in Latin America. Beltrán’s work and vision have transformed how we think, and should think, about U.S. Catholicism.  He is the only living person in the United States who participated actively at the 1968 Medellín conference, while he was one of the secretaries of CELAM.  When he was invited in the early 1970s by the U.S. Conference of Catholic Bishops to work in the United States, he proposed, envisioned and led much of the work of the National Encuentros of Hispanic Ministry.

Beltrán could rightly be considered the “father” or “founder” of the Encuentros that, for nearly five decades, continue to bear fruit in the life of U.S. Catholicism. He has enjoyed the respect of most of those who gave birth to and sustained Latinoa theology, including luminaries such as Virgilio Elizondo, Allan Figueroa-Deck, Arturo Bañuelas, Roberto Goizueta, Carmen Nanko-Fernandez, and Orlando Espín, and of many other leaders in Latinoa ministry and theology.   Beltrán has written about a dozen books on pastoral ministry and theology, some of them translated into several languages. He worked for more than twenty years in the Diocese of Rockford, overseeing Latinoa ministry. He has always been a theologian working in the trenches, and with real people, which reminds us of why we have Latinoa theology.

This year’s awardee is a true champion of lived theology, of doing theology within and from within lo cotidiano of real communities. His contributions have empowered many Latinoa Catholic communities across the country. And more than a few members of this Academy.

Therefore, the Academy of Catholic Hispanic Theologians of the U.S. is honored to recognize and convey the 2019 “Virgilio Elizondo” Award on Edgard Beltrán for distinguished achievement in theology, in keeping with the mission of this Academy.